I admit, I love flipping through SkyMall when I’m on airplanes. However, the catalog is chock-full of pseudoscience, as with today’s entry in “As Seen on TV!”, my occasional feature over at Double X Science. (Warning: contains my balding scalp.)

Ah, lasers. They may not have the mystique of magnets or the nous of “natural”, but they are a frequent ingredient in modern snake oil. (Come to think of it, one of the hair-restoration products may have contained snake oil. I don’t want to ask.) But while lasers can help correct nearsightedness in some cases, perform minimally invasive surgeries, and remove hair, color my scalp skeptical about their ability to restore hair. [Read more…] 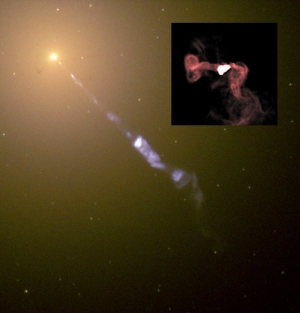 The long jet of gas in the galaxy M87, which is driven by the supermassive black hole at the galaxy’s center. New observations have revealed the structure of the gas disk near the black hole.

A collection of four big telescopes in Arizona, California, and Hawaii have banded together to examine one of the biggest black holes we know: the beast at the heart of the galaxy M87. What they found: the disk of gas driving M87’s huge jet rotates the same direction as the black hole that made it.

New observations from the Event Horizon Telescope (actually an array of four millimeter-wave telescopes working in concert) have revealed the best view so far of the supermassive black hole in the galaxy M87. As described in a Science paper, astronomers measured the motion of gas to a distance approximately 5.5 times the event horizon radius. That is close enough to confirm the gas circles in the same direction the black hole itself rotates. These observations help clarify the origin of the powerful jet of gas streaming from the galaxy’s center at a high fraction of the speed of light: it is likely driven by the swirling matter near the black hole’s boundary. [Read more….]

The Hubble eXtreme Deep Field (XDF) survey is the result of over 10 years of data, observing a single patch of sky roughly 1/15 the size of the full Moon (2 arcminutes, for the experts). The image encompasses 22.5 days worth of exposure time (though not all at once!), with the Hubble Space Telescope aimed at a dark spot in the constellation of Fornax. As with the earlier Hubble Deep Field (HDF) and Ultra Deep Field (HUDF)surveys, a lot of real science lies in this beautiful photo mosaic. Approximately 5,500 galaxies are within the field of view, with perhaps even more to be revealed via gravitational lensing. [Read more….]

Words are flowing out like endless rain into a paper cup

The dark matter problem is famous: about 80% of all mass in the Universe is invisible to light. However, a lot of regular matter is also “missing”, in the sense that we know it exists, but haven’t determined where it’s located. Measurements of the cosmic microwave background have shown how many atoms there are in the Universe, but they aren’t in galaxies. A new observation using the Chandra X-ray Observatory may show that at least some of the missing atoms are in giant hot gas clouds surrounding galaxies.

If the atoms were uniformly distributed around the galaxy, then they would make a sphere over 600 thousand light-years across, about six times the diameter of the Milky Way’s disk. Since the atoms are almost certainly not in a uniform cloud, the actual size of the cloud can’t be known, so the researchers weren’t able to determine whether the oxygen was in the CGM or the IGM. Either way, it is consistent with theoretical predictions. [Read more….]

Where are the missing atoms? All around us!

Quasars are some of the brightest objects in the Universe—powerful jets emanating from supermassive black holes as they gorge on gas. However, their light is irregular, both varying in brightness between different quasars and fluctuating in time. A new analysis may have found regularities within those fluctuations, which might allow them to be used as standard candles: objects whose intrinsic properties are known, and therefore can be used to measure large distances in space.

The researchers then fitted straight lines to periods of flux increase and decrease longer than 90 days. They found the slopes of these lines to be nearly the same. While the amount and duration of the change in flux differed, the rate of change in flux was similar. (This is analogous to comparing several cars with different top speeds, but the same acceleration capabilities). The data points were scattered, but still showed a clear trend: the quasars all seemed to vary in their light output at a certain rate, independent of their distance from Earth. [Read more….]

Could quasars be standard candles?

I’m currently in San Francisco for my younger brother’s wedding, but that doesn’t stop me from providing science content to you, dear readers. (Ahem.) Researchers have figured out a way to read and manipulate the quantum spin state of a single electron—a classic example in quantum computing that up until now has existed only in theoretical calculations.

(Yes, my Spanish sucks.) The Dawn mission found signs of volatile materials—including water and elemental hydrogen—on the surface of the asteroid Vesta. Since Vesta is likely the source of a particular type of meteorite on Earth, the presence of volatiles was surprising, but intriguing. Vesta is remarkably like the terrestrial worlds (Mercury, Venus, Earth, Mars, and the Moon), with a layered internal structure and interesting surface features, so the probable discovery of water further hints at its connection to the planets.

The presence of volatiles on the asteroid—and especially hydrogen—suggests they were added to the asteroid later. This implies a common source for Earth’s and Vesta’s water, further cementing Vesta’s status as a terrestrial world in its own right. [Read more….]

The first galaxies in the Universe probably played a major part in reionization—the event in which primordial gas was turned into a plasma. However, observations of this era are very hard: we’re looking back in time to when the first stars formed, over 95% of the total age of the Universe. As a result, the new discovery of a possible galaxy from 500 million years after the Big Bang is significant…and based on how they found it, its discoverers think it might be just one of many such galaxies.

The astronomers observed 12 galaxy clusters in a small region of the sky. Galaxy clusters are the most massive objects in the Universe bound together by gravity, so they are capable of being powerful gravitational lenses—distorting space in a way that magnifies the light from still more distant objects. The researchers found an object in the region of the galaxy cluster MACS J1149+2223 that appeared to correspond to a magnified galaxy. [Read more….]

The galaxy from the dawn of time 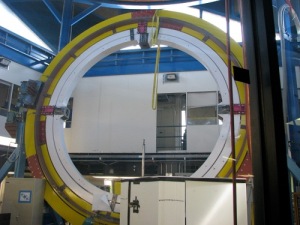 The test rig for DECam, which I saw when I visited Fermilab in May.

I had the privilege of visiting Fermilab in May, as part of my research for my book-in-progress. While I was there, I got to see the test rig for the Dark Energy Camera (DECam), which looks like something from Stargate or the wormhole entrance from Contact. Unfortunately for me, the camera itself had already been shipped to Chile, but yesterday DECam released its first images to the public. Here’s my story, written for Ars Technica:

DECam is mounted on the Victor M. Blanco telescope at the Cerro Tololo Inter-American Observatory (CTIO) in Chile, where dark energy was first observed in 1998. As the name indicates, it is a camera, albeit a far more sensitive one than is available to consumers. The business end of the camera is a set of 62 charged-coupled devices (CCDs), yielding images of 570 megapixels. [Read more….] 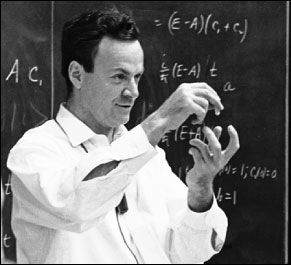 My latest post at Galileo’s Pendulum tests a way to explain quantum field theory to non-scientists, which I hope to put in my book-in-progress. Please go read the post, and let me know what you think!

Just as a ship moving through still water produces a wake, electrons create ripples in the ambient electromagnetic field. Those ripples are largest close to the electron and taper off over larger distances, becoming effectively zero. If another electron is nearby, the ripples they make will push the two particles apart. This is the quantum field version of the elementary school physics principle we all learned: “like electrical charges repel”. However, there’s a lot more going on! The ripples take time to travel between the electrons, so the interaction isn’t instantaneous. Also, they aren’t smooth waves like you get in water: they are themselves made of particles—specifically photons, particles of light. [Read more...]

Ships on a quantum sea

Why I will not write about JWST