(Yes, I’m inundating you all with writing. It’s a busy week, and I still have a few more things forthcoming to share with you.) 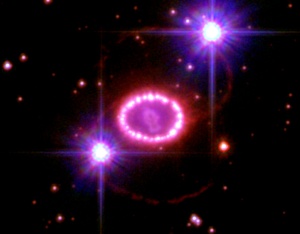 Supernova 1987a was the death of a massive blue star in the Large Magellanic Cloud, one of the satellite galaxies of our Milky Way. Because of its relative proximity and occurrence during the era of modern astronomy, the supernova remnant SNR 1987a (as it is known) is one of the best-studied of all. As a result, it provides a good testbed for the theory of star explosions. A new X-ray observation has measured the amount of radioactive titaniumcreated in the remnant, and showed it’s enough to power a lot of the light emission in the years following the supernova.

The decay of 44Ti produces high-energy X-ray photons at three distinct wavelengths. The researchers in the current study aimed the INTEGRAL (INTErnational Gamma-RAy Laboratory) satellite at SNR 1987a for about 4.5 million seconds (a total of over seven weeks) to obtain clear X-ray spectra. This process was complicated by the presence of a pulsar and a black hole binary system that, from our perspective, appear near SNR 1987a in the sky—these bodies also emit X-ray light. The astronomers identified the telltale spectral signature of titanium decay, and extrapolated from the number of photons (the flux) to determine the mass of the titanium before the decay process began. [Read more….]