What If Earth Stopped Turning?

Earth is spinning on its axis, completing one rotation every 23 hours, 56 minutes, and 4.1 seconds. That spin brings us day and night, makes stars appear to rise and set, and contributes to the general habitability of our planet. Rotation plays a role in the tides, along with the circulation of the atmosphere and oceans. So what would happen if Earth stopped rotating? Don’t worry about “how” or “why”; just think about the end result. The consequences tell us a lot about how our planet functions — as well as other worlds in the galaxy.

[Read the rest at Curiosity.com…]

And if I can be shameless: Forbes pays according to traffic, so the more of you who click on the link below and read my stuff, the better they pay me. Ahem.

Astronomers Use The Doppler Effect To Find Three Newborn Planets

We can’t witness the birth of our own Solar System, but the Atacama Large Millimeter/submillimeter Array (ALMA) is providing a picture of how it may have happened. ALMA spotted signs of three giant planets forming around a young star in our cosmic neighborhood. The technique astronomers used to study these planets is one that can be used to find other newborn worlds, and see exactly how clouds of gas and dust turn into something like the Solar System.

The star, which astronomers gave the memorable name HD 163296, is only about 4 million years old, which in cosmic terms makes it a baby. Researchers used ALMA to take detailed images of the disk of dust and gas surrounding the star, which showed three gaps. By studying the motion of carbon monoxide gas within the disk, the astronomers showed it was being moved by massive objects living in those gaps — a telltale sign of newborn planets. These findings were published in a pair of articles in Astrophysical Journal Letters.

[Read the rest at Forbes…]

Are We Alone in the Universe? 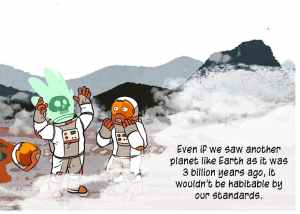 Panel from “Are we alone?”, a comic written by me with art by Maki Naro. [Credit: Maki Naro (art)/moi (words)]

How can we know if life exists elsewhere in the cosmos? To answer that question, we have to place Earth — and Earth life — in the context of other worlds in the Solar System and beyond. In my latest comic for The Nib with Maki Naro, we look at the science of planetary chemistry and the conditions of habitability as we know them, with the help of Johns Hopkins astrochemist Sarah Hörst and American Astronomical Society Public Policy Fellow Ashlee Wilkins.

How Astronomers Could Discover Mountains on Distant Planets

Planets too far away to photograph could yield some clues to whether water—and maybe even life—could exist.

Earth, Venus, Mars, the moon, and Pluto are very different worlds, but they have something in common: mountains. In fact, mountains occur on so many different bodies in the solar system that astronomers are pretty sure many exoplanets—planets orbiting other stars—also have them. And like planets and moons close to home, those mountains can tell us a lot about what’s going on with exoplanets. They might even help us discover how habitable these far-off worlds are.

But first, we have to see exoplanetary mountains. In a new paper to be published in the prestigious journal Monthly Notices of the Royal Astronomical Society, Columbia University astronomers Moiya A.S. McTier and David M. Kipping figured out what it might take to detect mountains on a world too far away to photograph even with our most powerful telescopes.

We Haven’t Found Alien Megastructures… Yet

The mystery formations and data discrepancies of Tabby’s Star turned out to have explanations. But that’s not what’s important about the mystery star.

For a second, we thought they were aliens.

In the case of Tabby’s Star—the star more formally known as KIC 8462852—the data (an an accompanying photo of towering figures) was weird enough that a few people surmised it maybe pointed to a sign of an alien civilization. The odds were never good, and a paper published earlier this week shows that aliens almost certainly aren’t involved.

Instead, astronomers think the abnormalities are probably either dust orbiting the star, fragments of comets, or even variations in “weather” on the star’s surface.

These possibilities are a lot more boring than aliens, but that doesn’t mean Tabby’s Star isn’t interesting. The very fact that we still don’t know exactly what’s going on (other than “it ain’t aliens”) is itself interesting.

Thanks to Google AI, Astronomers Have Found New Planets

They’re not habitable, but the dual discoveries change how we’re going to hunt for the next Earth.

For the first time, NASA has used machine learning to identify two new planets in distant star systems. One of those worlds is the eighth in its system, making that planetary system the largest-known yet discovered.

We know stars can have eight planets already (hello, Solar System!), so that’s no surprise. The excitement comes in how this new world was found: using an artificial intelligence machine learning method known as “neural networks.”

On Thursday afternoon, Christopher Shallue, a senior software engineer at Google Brain, and Andrew Vanderburg, an astrophysicist at the University of Texas at Austin, announced the new worlds in a press conference. It’s the eighth planet orbiting the 90th star in the Kepler observatory’s catalog, so it carries the name Kepler-90i. It’s a smallish, rocky planet orbiting very close to its host star. This method also identified a fifth planet in the Kepler-80 system, described in the same research paper.

The Universal Marathon: 13.8 billion years! You run this race whether you like it or not, so might as well enjoy it.

Evidently I forgot to post one of these roundups last week, so here’s two weeks’ worth of writing all at once! Also, I have a new sticker design you can order, for those of you (like me) who don’t willingly run for exercise, but want to feel you’ve accomplished something anyway. At least in a cosmological sense, we all run this marathon we call existence.

The New Yorker recently started “Elements”, a science and technology blog. Their most recent contributor is…me! I covered a strange little controversy begun when the International Astronomical Union (IAU), a professional society with over 10 thousand members, decided to pick a fight with a company offering a contest to name exoplanets. That company, Uwingu, decided to fight back, and the exchange highlighted a set of philosophical questions about who gets to name new worlds.

However, the International Astronomical Union, a society of professional astronomers, strongly disapproves of the entire concept, and published a statement to that effect (though without mentioning Uwingu by name). According to its Web site, the I.A.U.’s tasks include serving “as the internationally recognized authority for assigning designations to celestial bodies and surface features on them.” The process of naming new objects is complicated (the Web précis of the document is itself formidable), and the I.A.U. press release claims exclusive rights to decide what a planet is called—even over the wishes of the scientist or scientists who discovered it. [Read more…]

Now, can I get a picture of Eustace Tilley wearing a bowler hat?

Who names the exoplanets? Who gets to decide?

Imagine a planet 7 times the mass of Jupiter, hot enough to glow slightly, and containing dusty clouds of carbon monoxide and water. That planet is HR 8799c, one of the few worlds outside our Solar System which astronomers have been able to image directly. Part of the reason for its weirdness is its youth: the planet is only about 30 million years old, compared to the Solar System’s 4.5 billion-year age. In fact, up until an observation published this week, astronomers couldn’t be sure HR 8799c was even a planet: many of its properties make it look more like a brown dwarf, the star-like objects not quite massive enough to shine via nuclear fusion. Despite its strange aspects, the planet could help astronomers understand how the HR 8799 system formed—and reveal information about the origins of our own Solar System.

Quinn Konopacky, Travis Barman, Bruce Macintosh, and Christian Marois performed a detailed spectral analysis of the atmosphere of the possible exoplanet. They compared their findings to the known properties of a brown dwarf and concluded that they don’t match—it is indeed a young planet. Chemical differences between HR 8799c and its host star led the researchers to conclude the system likely formed in the same way the Solar System did. [Read more…]

When our Sun runs out of nuclear fuel, it will shed its outer layers, while what’s left of the core will remain as a white dwarf: an object the size of Earth, but far more massive. During the final stages of the Sun’s life, Earth is likely to perish as a habitable world, but that’s not necessarily the case for every planet orbiting a Sunlike star. That’s the basis of a new paper, which posited that white dwarfs may even provide the best hope for detecting extraterrestrial life.

The advantages of these systems would be manifold: a white dwarf is much smaller than a star, so if a planet passes between it and us, far more light is blocked. And Avi Loeb and Dan Maoz proposed that at least some signs of life might have survived the deaths of these stars. The light emitted by the white dwarf could highlight any oxygen in the exoplanet’s atmosphere, which would be seen as a strong hint of life. [Read more…]

Living planets in a stellar graveyard