“Life, uh, finds a way”—Applying lessons from evolution to go to Mars

Biomimicry looks to living organisms to create the future of sustainable engineering. 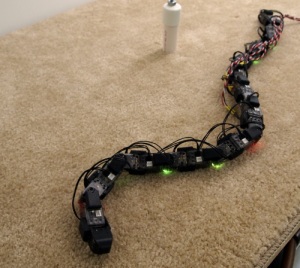 A robot designed to move like a sidewinder snake, from Henry Astley’s lab at the University of Akron. [Credit: moi]

To phrase that more scientifically, evolution has had billions of years of trial and error to produce species that are well adapted chemically and physically. Many human researchers want to imitate that adaptation, turning lessons from the natural world into practice in engineering, technology, and architecture. The entire venture goes under the name “biomimicry.”

“I think biomimicry is really beautiful,” says Ariel Ekblaw, a student at MIT’s Media Lab, who founded and leads the Media Lab’s Space Exploration Initiative. “It’s both a framework and… a set of tools or learnings from nature that can inform modern engineering and science research projects.”

To see the spectrum of biomimicry research, I attended a three-day workshop called “Nature-Inspired Exploration for Aerospace.” The workshop was cosponsored by NASA’s Glenn Research Center, the Ohio Aerospace Institute, and Great Lakes Biomimicry. Despite the aerospace focus, the program ranged from straight-up biology to philosophical queries about the reasons for doing biomimicry in the first place.

[Read the rest at Ars Technica…]