Yesterday (November 10, 2012) I spoke about black holes at the Richmond Public Library. For those who couldn’t make it, or who were there but want more information, here’s the essence of the talk, along with the relevant images that formed my slides. Please leave any questions you have in the comments, and thanks to everyone who came out (despite the insane marathon-related traffic)!

Discussions of black holes fall into two distinct categories. The first is the sexy string theory/quantum gravity/Stephen Hawking category, all about time warps, wormholes, extra dimensions, Bekenstein entropy, and baby universes; the second discusses the real black holes discovered in our galaxy and beyond. While the sexy stuff is a lot of fun to talk about, that’s not what I discussed: it’s speculative, and at the present time impossible to test. (Some of it by its very nature is impossible to test, since we can’t get access to the region inside a black hole. More on that shortly.) However, I think real astronomical black holes are just as interesting, and over the last several decades astronomers have realized how important they are in shaping the galaxies they inhabit.

The Monster in the Galaxy’s Basement

The center of our galaxy in X-ray light. [Image courtesy of the Chandra X-ray observatory and NASA.]

This object is known as Sagittarius A* (pronounced “a star”). Since X-rays are some of the most energetic forms of light, it takes a lot to make them in these quantities. (Stars, including our Sun, are X-ray sources. However, even with the billions and billions of them in the Milky Way, a few other objects—mostly remnants of supernovas—outshine all of them put together.) The picture becomes even more interesting when Sagittarius A* was examined in infrared light, by the Keck telescope in Hawaii.

The animation below is constructed from real data taken from observations lasting over a decade. (For more information, see my recent Ars Technica article on the latest results from the astronomers who have been watching the galaxy’s center.) Each circle is a star (or “stellar object”, labelled “SO”), and with so many years of observation, we can see their orbits. What they are orbiting is invisible in infrared light, but using Kepler’s laws of motion we can learn a few things: the hidden object is about 4 million times the mass of the Sun, and it occupies a space much smaller than our Solar System. No single star can grow that large, and the space the hidden object occupies is too small to be a cluster of stars. The only thing we know of that fits the bill is a supermassive black hole.

Animation of stars (designated “S0”) near the central black hole in the Milky Way, based on 17 years of observations in infrared light. [Credit: Keck/UCLA]

A supermassive black hole has a lot of mass. (Subtle concept!) As it turns out, nearly everygalaxy we’ve observed contains a supermassive black hole at its heart, ranging from millions to billions of times more massive than the Sun. And just like Sagittarius A* in the Milky Way, these black holes are often very bright in X-rays, radio light, or both. To understand why, let’s look at a black hole up close (well, kind of).

Anatomy of a Black Hole

The “interior” of a black hole. The rotation of the black hole is revealed by how it distorts the shape of spacetime around it: a veritable whirlpool dragging matter and light that comes too close. In the region known as the ergosphere, this effect is so strong nothing can be at rest, no matter how much energy it has. Traveling closer (not that you’d want to), the event horizon defines the black hole’s boundary. Once anything passes inside the event horizon, it cannot return to the outside universe. [Picture courtesy of me.]

A black hole is defined by a boundary known as its event horizon. Anything that crosses that boundary cannot ever return to the outside Universe—and that “anything” includes light. Even if you could survive the passage across the event horizon, you’d never be able to tell your story, because your radio signal back to Earth would be trapped inside the event horizon with you.

Despite the intensity of the gravitational field surrounding a black hole, nothing is actually “sucked in”. Far from a black hole, it acts like anything else. In fact, if you removed the Milky Way’s black hole from the galaxy, the Sun’s orbit wouldn’t be noticeably affected—we’re just too far away (about 26,000 light-years) for the black hole’s gravity to make a profound difference. 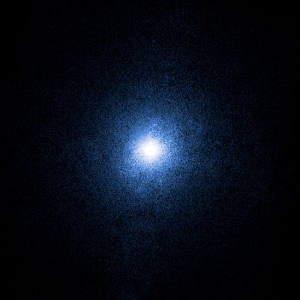 The X-ray source known as Cygnus X-1 was the first black hole identified. Charged particles (electrons and protons) stripped off a companion star are accelerated nearly to the speed of light, causing them to emit a lot of high-energy photons. [Credit: Chandra X-ray observatory/NASA]

Close by is a different story. Near a black hole, the gravitation is strong enough to accelerate particles nearly to light speed. This is the case for the first black hole ever discovered: Cygnus X-1. Stars are made of plasma: a hot gas consisting of electrons and bare nuclei. When the Cygnus X-1 strips those charged particles off a companion star, they experienced strong acceleration, which in turn causes them to emit photons, both in radio light and X-rays. (This phenomenon is known variously as cyclotron radiation, Bremsstrahlung, and other fun science-fictiony names.) In case that isn’t enough, when charged particles move, they generate magnetic fields, which in turn can cause more acceleration.

Black holes are powerhouses while feeding on gas, in other words. They may be invisible when isolated, but when they have stars or clouds of gas or other things to gorge upon, they can be some of the brightest objects in the whole Universe.

The active galaxy Centaurus A, rendered in several different types of light. Note in radio waves (the central image at right), the galaxy itself seems to disappear, replaced by crossing jets of radio-emitting jets. Those are produced by the supermassive black hole at the galaxy’s core.

One of the closest AGN to us is a bizarre galaxy called Centaurus A. The galaxy itself appears highly distorted, and has a huge lane of opaque dust running across the center. As you can see from the multiple images in various forms of light, the black hole at the Centaurus A is particularly aggressive, sending out jets of gas as wide as the entire galaxy. Jets like these aren’t completely understood, but the consensus in the astronomy community is that they are driven by magnetic fields like the ones I mentioned in the previous section.

The large image shows the jet streaming from the center of the galaxy M87, in visible light. The inset (in radio light) zooms in on the black hole, and shows the swirling gas around the galaxy’s core. M87 is one of the largest galaxies known, and has the largest-known black hole, estimated around 6.6 billion times the mass of the Sun. [Credit: Hubble/NASA (main image)/NRAO (inset)]

The champion heavyweight is in the galaxy M87. The galaxy itself is known as a giant ellipticalgalaxy: one lacking the distinctive spiral arms that dominate many of the most beautiful astronomical images. In fact, M87 is pretty dull-looking, being a fairly spherical blob of stars…but with a long streamer of gas flowing from its core. This jet is thousands of light-years long, and emanates from the galaxy’s supermassive black hole. The inset in the image on the right shows a close-up view of the galaxy’s core, and how much swirling gas there is to feed the black hole. M87′s black hole is estimated to be about 6.6 billion times the mass of the Sun—more than a thousand times the mass of the Milky Way’s black hole!

The Submillimeter Telescope (SMT), one of four telescopes comprising the Event Horizon Telescope array. These telescopes measured the rotation of gas near the central black hole in M87. [Credit: moi]

A recently published study highlights the closest observation yet undertaken of M87’s black hole. Using four telescopes in concert, astronomers found the gas revolves in the same direction that the black hole itself rotates. This is the closest observation to the ergosphere, a significant advance in black hole astronomy. If you’re curious to find out more, I wrote an extensive article on the subjectthat fills in a lot of the details. (In fact, I visited the site of one of these telescopes two weeks ago, though I wasn’t able to tour the telescope itself. I offer the photo at left to prove at least that I was there!)

So is the Milky Way’s black hole active? Actually, it’s not. M87 is relatively calm, while Centaurus A is very active, but the Milky Way’s core is pretty much sleeping. But has it always been that way? The answer seems to be no: in 2010, the orbiting Fermi gamma-ray observatory found two huge bubbles of gas emanating from the center of the galaxy. Given the extent of the bubbles (2,000 light-years long), they obviously formed some time ago, and may reveal an earlier epoch when the black hole was more active than it is today.

Bubbles emanating from the center of the Milky Way may reveal that the black hole was much more active in the past than it is today. [Credit: Fermi Gamma Ray Observatory/NASA]

A black hole that is too active is not good: the powerful jets can sweep away gas needed to make stars, starving the galaxy. Additionally, the intense radiation from accelerating particles is bad for planets like ours. However, black holes may help star formation under other circumstances if the flow isn’t as fierce. The understanding of the mutual interaction between galaxies and their black holes is an area of active research. It’s possible that our galaxy’s black hole may have shaped the environment that allowed the Sun—and therefore Earth—to form. 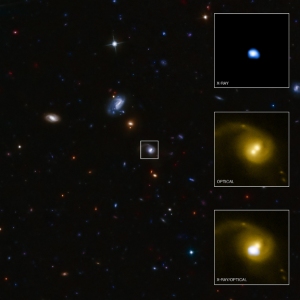 I mentioned that most galaxies contain supermassive black holes. That obviously hints that some don’t. In rare cases, it seems that galaxies can kick their black holes out, as the result of a collision between two galaxies. Big galaxies are built of smaller ones, through long processes of collisions and mergers. If the conditions are just right, the central black hole can be knocked loose, leaving it to roam the Universe. An article I wrote for Ars Technica has a lot more details about this kind of nightmarish scenario.

Two black holes in the galaxy 3C75, which formed from the merger of two smaller galaxies. It’s possible in the future that the two black holes will collide and merge into a bigger black hole.

There’s also a good chance that you’re thinking, “how can black holes grow so huge?” One possible way is by two black holes colliding and combining to make an even bigger black hole! The image at the left shows just such a case: a galaxy that underwent a merger in the not-so-distant past (in cosmic terms at least). Each galaxy contributed one black hole to the resulting object, which may over time themselves collide and make one even larger black hole. While this isn’t enough to explain how every supermassive black hole got fat, it might help us understand at least some cases. That’s a post for another day!

Finally, many people asked if I could recommend some books. Here are a few I’ve read, so the list is not exhaustive. I’ve limited myself to books for non-scientists, so if you want some physics recommendations, please let me know in the comments, and I’ll provide them.

[This post is derived from an earlier version over at Galileo’s Pendulum, which itself was based on a talk I gave in September.]