I spent much of the week sick, but that doesn’t stop me. I care about you, people.

And just because I can, here’s Cookie Monster playing with his Newton’s cradle again. 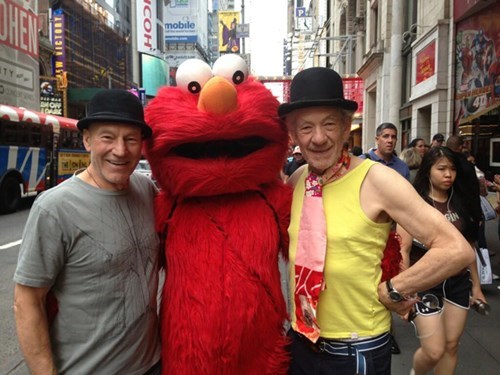 Who knew that Patrick Stewart and Ian McKellan were fans of Bowler Hat Science?

Another light week for publishing, but you’ll see the fruits of my labors soon! In the meantime, I note that Patrick Stewart and Ian McKellan are also bowler hat connoisseurs.

Cthulhu at NASA Wallops, for the LADEE launch last weekend. (I didn’t wear the hat the whole time. I’m not that weird.)

Where’s the edge of the Solar System?

A radio image of Voyager 1, as seen by the Very Long Baseline Array (VLBA) and the Green Bank Telescope. Click for a larger image and more information. [Credit: Alexandra Angelich, NRAO/AUI/NSF]

However, if you want to say Voyager has left the Solar System, I’ll back you up: the boundary between the Oort Cloud and the “rest of the galaxy” isn’t very well defined. Gravity technically extends forever, though it weakens substantially with larger distances. As a result, the Oort Cloud is a fuzzy edge, and one we can’t measure. Is the end of the Solar System the point where the last Oort Cloud body resides?

Now, I agree with the pedants that the Oort Cloud truly does define the end of the Sun’s influence, and therefore is the edge of the Solar System. But the magnetic boundary of the Solar System, which is arguably the more important one from the point of view of astronomy, is defined by the edge of the heliopause, where the solar wind hits interstellar gas. That boundary, while it fluctuates with solar weather, is a much clearer division, and one we could conceivably measure near other stars.

So, I’m a both/and kind of guy in this case. Since there’s no single, sharp boundary between the Solar System and “everything else”, let’s just say there are two edges: one for the Sun’s electromagnetic influence (the heliopause), and one for its gravitational influence (the Oort Cloud). Voyager crossed the first one, but won’t reach the second one for 300 years. Now, can we get back to talking about how awesome Voyager is?

The last week was especially busy because I attended the launch of the Lunar Atmosphere and Dust Environment Explorer (LADEE) at NASA’s Wallops Flight Facility. I will have a lot to say about that launch, LADEE, and related topics later on, but suffice to say it was a great experience — increased because it was my first successful rocket launch viewing. (I attempted to watch the Antares rocket test in April, but that was scrubbed at the last minute and I couldn’t attend the rescheduled launch.) So, here’s my very small list of articles published this week.

I also wrote a brief viewing guide for the LADEE launch, which is now necessarily obsolete. However, you can find a lot of photos and video from the launch at NASA’s LADEE site.