And if I can be shameless: Forbes pays according to traffic, so the more of you who click on the link below and read my stuff, the better they pay me. Ahem. 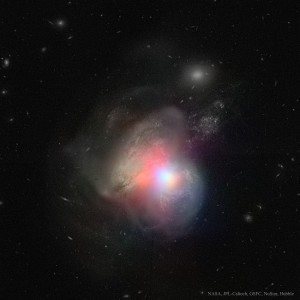 Astronomers captured the last moments of an unlucky star that got too close to a black hole. However, they didn’t know that’s what we were seeing right away, because the whole scene of carnage was hidden by clouds of gas and dust. Now, with multiple types of observations and more than ten years of data, we have new insights into the way black holes shred stars, as reported in a new paper in Science.

Black holes, like Cookie Monster, are notoriously messy eaters. That’s good for astronomers, though, because the cosmic crumbs a black hole spills during its meal emit a lot of light. If a star gets too close to a black hole, the gravity tears it to pieces in an act known as “tidal disruption”, but only part of the star’s material actually falls in. (This is a more extreme version of the same forces that raise tides on Earth, and which destroyed a small moon to create Saturn’s rings.) The rest of the star gets channeled into a powerful jet that streams away from the black hole back into space.

[Read the rest at Forbes…]