Glueballs are the missing frontier of the Standard Model

There should be particles made entirely of gluons, but we don’t know how to find them

The discovery of the Higgs boson was rightfully heralded as a triumph of particle physics, one that brought completion to the Standard Model, the collection of theories that describes particles and their interactions. Lost in the excitement, however, was the fact that we’re still missing a piece from the Standard Model—another type of particle that doesn’t resemble any other we’ve yet seen.

The particle is a glueball, but its goofy name doesn’t express how interesting it is. Glueballs are unique in that they don’t contain any matter at all: they have no quarks or electrons or neutrinos. Instead, they are made entirely of gluons, which are the particles that bind quarks together inside protons, neutrons, and related objects.

Particle physicists are sure they exist, but everything else about them is complicated, to say the least. Like so many other exotic particles (including the Higgs), glueballs are very unstable, decaying quickly into other, less massive particles. We don’t have any ideas about their masses, however, which is obviously kind of important to know if you want to find them. We also don’t know exactly how they decay, making it hard to know exactly how we’ll identify them in experiments. [Read the rest at Ars Technica….]

The mystery of particle generations

Why are there three almost identical copies of each particle of matter?

The Standard Model of particles and interactions is remarkably successful for a theory everyone knows is missing big pieces. It accounts for the everyday stuff we know like protons, neutrons, electrons and photons, and even exotic stuff like Higgs bosons and top quarks. But it isn’t complete; it doesn’t explain phenomena such as dark matter and dark energy.

The Standard Model is successful because it is a useful guide to the particles of matter we see. One convenient pattern that has proven valuable is generations. Each particle of matter seems to come in three different versions, differentiated only by mass.

Scientists wonder whether that pattern has a deeper explanation or if it’s just convenient for now, to be superseded by a deeper truth. [Read the rest at Symmetry…] 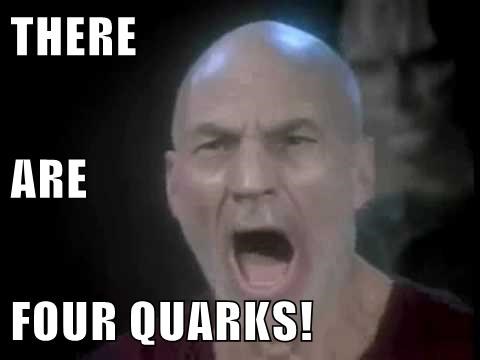 Writer/editor David Manly posed a series of questions to scientists and writers, soliciting short responses on topics of broad interest. Those interviewed were shark researcher David Schiffman, paleontology writer/sauropod snogger Brian Switek, and me. If you want to know who would win an arm-wrestling contest between a human and a Tyrannosaurus, or how we know black holes exist if we can’t see them, this post is for you.